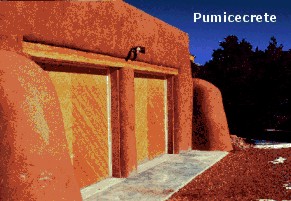 Lightweight concrete, weighing from 35 to 115 pound per cubic foot, has been used in the United States for more than 50 years. The compressive strength is not as great as ordinary concrete, but it weathers just as well. Among its advantages are less need for structural steel reinforcement, smaller foundation requirements, better fire resistance and most importantly, the fact that it can serve as an insulation material! It can cost more that sand and gravel concrete, and it may shrink more upon drying.

Lightweight concrete may be made by using lightweight aggregates, or by the use of foaming agents, such as aluminum powder, which generates gas while the concrete is still plastic. Natural lightweight aggregates include pumice, scoria, volcanic cinders, tuff, and diatomite. Lightweight aggregate can also be produced by heating clay, shale, slate, diatomaceous shale, perlite, obsidian, and vermiculite. Industrial cinders and blast-furnace slag that has been specially cooled can also be used. Pumice and scoria are the most widely used of the natural lightweight aggregates. They are porous, froth-like volcanic glass which come in various colors and are found in the Western United States. Concrete made with pumice and scoria aggregate weighs from 90 to 100 pounds per cubic foot. The rock from which perlite is manufactured has a structure resembling tiny pearls and when it is heated it expands and breaks into small expanded particles the size of sand. Concrete made with expanded perlite weighs between 50 to 80 pounds per cubic foot and is a very good insulating material. 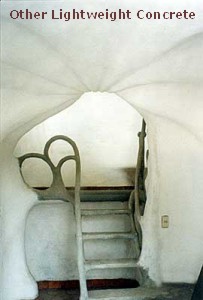 Vermiculite comes from biotite and other micas. It is found in California, Colorado, Montana, and North and South Carolina. When heated, vermiculite expands and becomes a fluffy mass, which may be 30 times the size of the material before heating! It is a very good insulating material and is used extensively for that purpose. Concrete made with expanded vermiculite aggregate weighs from 35 to 75 pounds per cubic foot.Concrete made with expanded shale and clay is about as strong as ordinary concrete, but its insulation value is about four times better. Pumice, scoria, and some expanded slags produce a concrete of intermediate strength, but with even more impressive value as insulation. Perlite, vermiculite, and diatomite produce a concrete of very low strength, but with superior insulation properties; however these are subject to greater shrinkage. All of these kinds of lightweight concretes can be sawn to some extent, and they will hold fasteners, especially screws.

Another material that could be considered lightweight concrete is commonly known as papercrete. This is composed of mostly re-pulped waste paper, mixed with Portland cement and other mineral materials (such as sand). Papercrete has many unique properties that must be carefully considered when it is used as a building material. While it is quite insulating, it also can absorb a considerable amount of water. The compressive strength is not as great as other lightweight concretes, but it is a surprisingly durable material.

I have divided this section into three general categories: pumicecrete, papercrete, and other lightweight concretes, which would include the use of vermiculte or perlite as an aggregate.